Real Madrid’s Veni Jr. scored a goal in the final of the UEFA Champions League in Paris, which helped Madrid win the title for the 14th time. 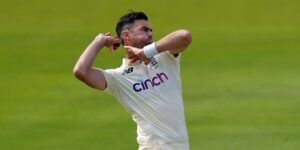