National cricket team captain Babar Azam has said that it is no less an honour to lead Pakistan cricket team in Benaud-Qadir Trophy.

Babar Azam said that he is very excited to host the series against Australia after 24 years. Pakistan cricket fans have always supported his team through social media.

He said that the people of Rawalpindi have been requested to turn to the stadium in large numbers, all other fans should take their seats in front of the TV screens in their homes and encourage the players. 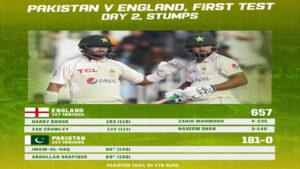